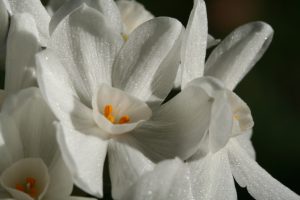 Hey, it’s National Eggnog month… and that’s pretty wonderful. However, I don’t think it coincidental that December is also National Impaired Driving Prevention Month, too.  So enjoy your eggnog responsibly.

The December flower is holly or narcissus (paperwhite).  Holly, with its shiny evergreen leaves and red berries (which are found on female plants only), has been used in mid-winter festivals for centuries.  Holly berries, although toxic to humans, pets, and livestock are an important winter food source for birds and other wild critters.  Gorgeous paperwhites with their delightful fragrance are true reminders that spring is coming.   Many nurseries and florists have kits available that contain everything you need to force paperweight bulbs indoors easily. They make great gifts for those who can’t get out much during the winter months. 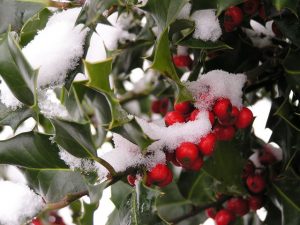 Hanukkah, also called the Festival of Lights, begins at sundown on Sunday, December 2, and ends at sundown on the 10th. Hanukkah is the Hebrew word for dedication and commemorates the rededicating of the Holy Temple in Jerusalem and restoring its menorah or lamp.  There was only enough oil to light the lamp for 1 day, yet it burned for 8 full days.  And Jewish folks around the world celebrate this miracle every year starting on the 25th day of the Hebrew month Kislev. This day can occur anytime from late November to late December.

On December 6 the last of our Holiday Decoration events for the year, the Boxwood Tree Workshop, takes place.  Hope you’ve signed up to attend this fun, festive affair.

December 7 is National Pearl Harbor Remembrance Day which commemorates the surprise attack on the American Army and Navy bases in Pearl Harbor, Hawaii, on December 7, 1941.  The attack, which killed more than 2,000 citizens, injured 1,000 others, and destroyed ships and aircraft, forced the United States into World War II.  Although it is not a national holiday, people are asked to fly their American flags at half staff.  Throughout the U.S. there are many memorial services and activities to honor those who died.

December 15, Bill of Rights Day, honors the ratification of the first ten amendments to the U.S. Constitution, which occurred on this day in 1791. The Bill of Rights spells out our rights as Americans; and guarantees civil rights and liberties such as freedom of religion, speech, and peaceable assembly.

December 21 is the first day of Winter in the Northern Hemisphere when the sun is farthest south.  Known as the Winter Solstice, it is the day with the fewest hours of sunlight in the whole year.  So, on December 22 we can celebrate the start of longer periods of sunshine, heading right toward SPRING!

December 26 is Boxing Day in Canada and the UK.  In Victorian Times, churches put out boxes and urged their parishioners to donate items which were then distributed to the needy.  Boxing Day was also a day for wealthy employers to give their workers boxes containing cash, food, and other treats and their servants the day off.  Unlike the U.S. Boxing Day is a holiday in the U.K. and another reason to make merry. It is not necessarily a day for pugilism.

December 26 is also the first day of Kwanzaa, which is celebrated by African Americans.  It is the time of year when African tribes celebrated the first harvest of their crops.  It is a seven-day spiritual holiday that focuses on seven basic principles: unity (umoja), self-determination (kujichagulia), collective work and responsibility (ujima), cooperative economics (ujamaa), purpose (nia), creativity (kuumba), and faith (imani).  Celebrants light a candle each evening and may exchange gifts.

December 31 is the time when we ring out the old year and ring in the new.

No matter what you do or how you celebrate, December is a wonderful month to see friends and family.  We here at Power of Flowers Project wish you all a peaceful, delight-filled December and a very Happy New Year.