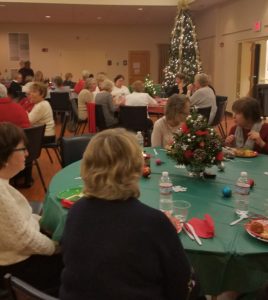 On December 14, many of the Power of Flowers Volunteers took a brief break from making signature bouquets and started making merry at The Annual POF Volunteer Holiday Party.

We thank our friends at the Tewksbury Senior Center for kindly allowing us to use their wonderful, festively decorated room, which comfortably fit the approximately 50 volunteers who attended.

And those who attended had a great time catching up and making new friends. The room was bright with Christmas lights and each table had one of our own lighted boxwood trees or pretty candle centerpieces created by the POF Decorating Committee. There was quite a variety of delectable dishes people brought to share. It’s safe to say that no one went home hungry. 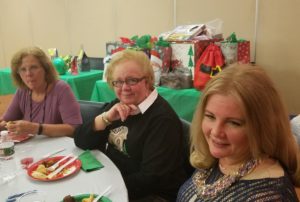 While everyone was enjoying the meal, Joyce B. made several end-of-the-year announcements that put everyone in the holiday spirit: 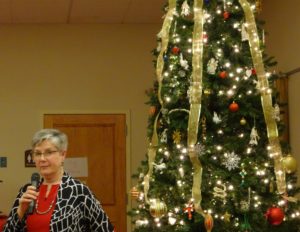 Kali W. awarded several certificates to volunteers who had performed over and above the call of duty. Some of the recipients were:

? Lois A. – for Chairing our super-successful Spread the Joy Luncheon fundraiser.
? Joyce B. – for being the most traveled picker-upper volunteer.
? Barbara B. – for being Recycling Program Leader extraordinaire!
? Rita B. – for generally being referred to as The Energizer Bunny of the workshop! 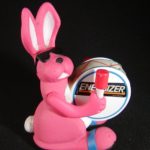 ? Linda C. – for being the Monday Power Volunteer and being fun, enthusiastic, and focused on creating the most bouquets.
? Phyllis D. – for Chairing the 2017 Plant Sale and for being, sweet, positive, and thorough.
? Maria F.– for Chairing the Flower Therapy Workshops and being a pleasure to work with!
? Mary G. – who is always ready and willing to pick up and make deliveries anytime.
? Liz J. – for making volunteer callout communications seamless as well as entertaining. 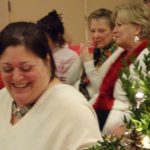 ? Barbara M. – for her sparkling personality and genius marketing skills which made our first Victorian Tea a HUGE success.

But then, it was time to award the Academy-Golden Globe-Triple Crown Award: the POF Pink Apron. The Pink Apron Award is given twice a year (in May and December) to the person who has received the most votes from the Volunteers in a secret ballot. 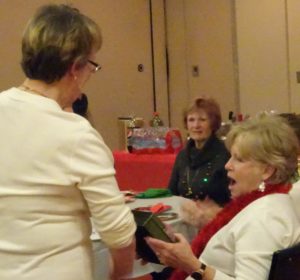 Jane R. was presented with the Pink Apron Award for her contributions and for demonstrating outstanding dedication, generosity, and effort in carrying out the mission of the POF project. And she did it all with grace, charm, and a great sense of humor To thunderous applause, Jane now joins the exalted ranks of Joyce B., Linda C., and Liz J. who are previous pink apron winners.

You can read more about Jane and The Pink Apron Award in the blog post ?Not All Super Heros Wear Capes.”

Much hilarity ensued after the awards were given when everyone participated in the Saran Wrap Ball Game? 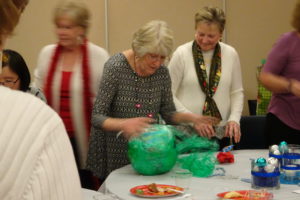 The Saran Wrap ball was passed to a volunteer who unwrapped the plastic to reveal many wonderful prizes: candy, gift cards and certificate for larger prizes, such as wine, The volunteer continued unwrapping as fast as she could until another volunteer rolled doubles on a pair of dice. Then the ball was passed to the next volunteer. Round and round the ball went with lots of laughter until it was depleted (the ball, certainly not the laughter!). 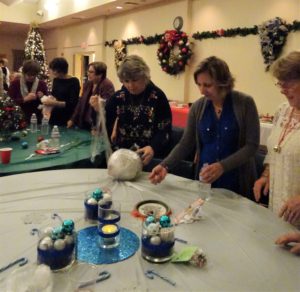 As at the Volunteer Appreciation Brunch in June, volunteers brought much needed items for the residents of the battered women’s safe house and their children. The focus this time was on toys for the children as well as necessities for their moms. Many hands helped pack up the gifts and put them in a van to be delivered to the home. 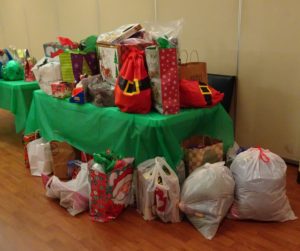 After making quick work of cleaning up, attendees chose a charming little gift bag filled with candy and a hand-made Power of Flowers ceramic ornament on their way out.

Jane R. and her committee did a fantastic job putting together the fun, festive evening. Thanks to them, the Annual Volunteer Holiday Party 2017 was a rousing success!

Thanks to all who attended and brought goodies and those who planned, decorated, and made the event happen.

Merry Christmas to All and to All a Good Night 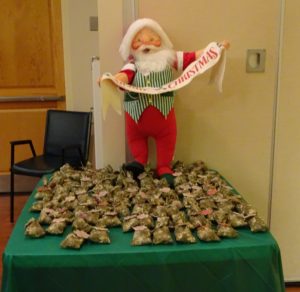