The 3rd Annual Spread the Joy Luncheon A Rousing Success! 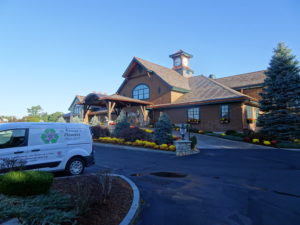 Wednesday, October 18, 2017, dawned bright and beautiful as only a fall day in New England can. The Tewksbury Country Club, decked out in fall finery, sparkled.

Power of Flower Volunteers and staff were there very early putting finishing touches on all the details that make for a memorable event. 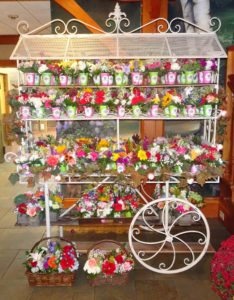 Shortly before 11 AM Luncheon attendees began arriving. As they entered the lobby, they were greeted by an awesome sight? The lovely POF Garden Cart filled with over 300 colorful signature bouquets.

Soon the Andrea Room, site of the Silent Auction, was buzzing with bidders checking out all the available items. The tables were resplendent with auction items, balloons, colorful wrappings. It was a perfect day to catch up with friends, renew acquaintances, and get a jump on holiday shopping. 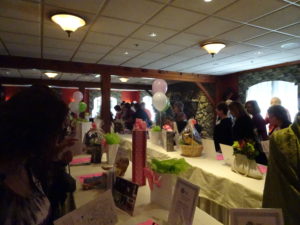 Across the lobby in the Grand Sequoia Ballroom people were OOHing and AHHing over the beautiful table settings, buying tickets, and “shopping” the raffle items around the perimeter of the room. 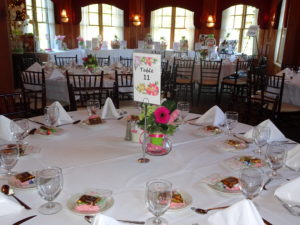 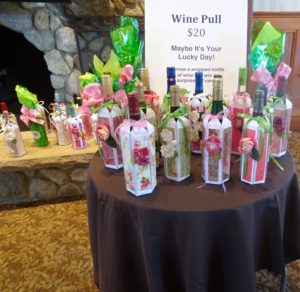 The wine pull in front of the magnificent fieldstone fireplace garnered a great deal of attention and in fact sold out very early.

Scattered throughout the venue were large photos depicting the reason for the gala event? smiling people receiving POF bouquets? a wonderful reminder of why we do what we do 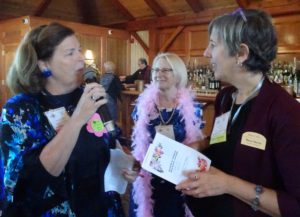 Master of Ceremonies, Janet D. aided by Barb M. gave attendees a chance to voice what POF meant to them: as a volunteer, a recipient, a sponsor. 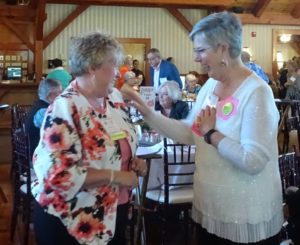 As luncheon was being served, Joyce B., POF Founder, thanked all who worked so hard putting the luncheon together, all the sponsors, and all the attendees for coming. She then presented a brief history of POF and what she saw as the organization’s future.

Next, Michelle Silveira, Senior Vice President and Chief Marketing Officer from Jeanne D?Arc Credit Union, the Presenting Sponsor, spoke briefly. She said how proud JDCU was to be the presenting sponsor for the event and to support again POF’s major impact on the community.

After a delicious meal, Leslie K., the POF Executive Director, said a few words. She described her first six months at the organization’s helm and proudly announced that POF has passed the 70,000 bouquet milestone… 70,000 bouquets had been delivered since its inception bringing joy to as many recipients. 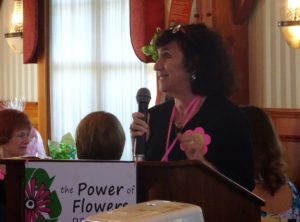 Sadly, all good things must end. Raffle winners were announced and stepped forward to receive their prizes. Successful silent auction bidders queued up to pick up their winnings. As each person left, he or she was handed one of the beautiful bouquets from the Garden Cart.

People spilled out into the bright sunshine many holding their winnings? everyone left with something, even if it was just a signature bouquet, a gratitude bag of chocolate goodies, and the memory of a lovely time helping an organization help others.

Once again, a heartfelt thanks to all who made this event possible?Volunteers, Board Members, Planning Committee, Sponsors, and all who attended.

We couldn’t do what we do without you! 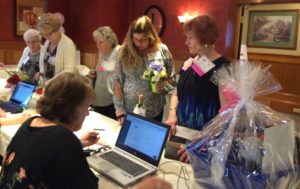 Watch the Spread the Joy: A Day to Remember a video with music on the Power of Flowers website. Hope it brings back the joy you felt on that day, if you were there, or gives you a sense of it, if you were unable to attend. 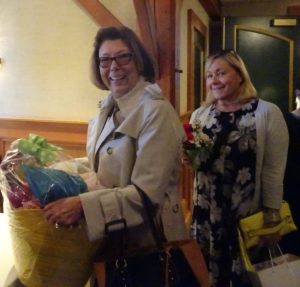 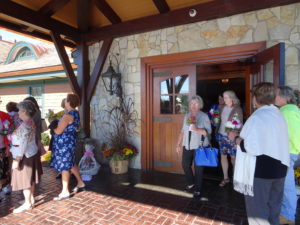